From West to East: The Charged Challenge of Delivering Electricity

The Heihe-Tengchong Line is an imaginary division that slices China into two roughly equal land masses. Chinese geographer Hu Huanyong created this line in 1935 to illustrate that the vast majority of people—94% by recent estimates—live in the eastern half. 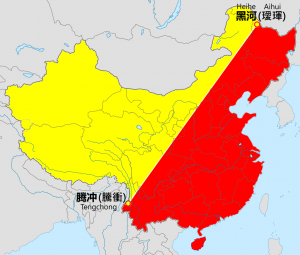 A region replete with industrial hubs, free trade zones, and megacities, it isn’t surprising that over 1.3 billion Chinese citizens reside to the right of Hu’s invisible line. Yet, while the east offers many of the best opportunities for jobs, education, and economic advancement, its population density is threatening many of the country’s most ambitious plans to improve air quality, embrace renewable energy sources, and, ultimately, reduce carbon emissions.

Take the Jingjinji Metropolitan Region, a cluster of megacities in China’s northeast, as an example. Straddling Beijing, Tianjin, and Hebei province, Jingjinji has a population of 112 million and accounts for over 9% of China’s total GDP. Bringing together the household energy demand of municipalities such as Beijing and Tianjin, the industrial demand of heavy industries such as steel production and petrochemicals, and the daily transit of trains, planes, and millions of cars, Jingjinji, while an economic powerhouse, regularly ranks as one of the most polluted regions in the country.

Naturally, Beijing has sought to alleviate the persistent air pollution in the capital, but coal, which still provides up to 58% of China’s energy, is relatively cheap, close, and abundant. China has a decent supply of both wind and solar power, but the majority of ideal wind and solar power comes from flat, sunny desert provinces far to the west. With China’s 14th Five-Year Plan proposing a “major push” for clean energy, policymakers face tough choices as they seek to find the right blend of incentives and technology to meet President Xi’s pledge to hit peak carbon by 2030 and become carbon-neutral by 2060.

While there is no magic bullet to achieve these goals, the predominance of renewable resources in the west, coupled with rising electricity demand in the east, have driven unique innovations in China’s quest to clean up its air.

Solar and wind resources can be harnessed throughout the country, but certain regions offer more favorable conditions to transform raw sunlight and wind into electricity. Many of the ideal wind and solar resources are concentrated in Inner Mongolia, Xinjiang, Qinghai, and Gansu provinces, arid and semi-arid regions that provide long, sunny days and reliable wind. As a result, these provinces now boast some of the world’s largest renewable energy-producing installations.

Longyangxia Dam Solar Park, located high on the flat, sunny Tibetan Plateau, covers nearly 10.5 square miles of desert terrain. Connected to the hydropower-producing dam from which it draws its name, the solar park has the capacity to power around 200,000 households with electricity and was briefly the world’s largest solar installation in the world.

Another example, Tengger Desert Solar Park, is a 17-square-mile installation in Ningxia province that offers 1.5 gigawatts of fully renewable capacity. NASA satellite photos juxtaposing 2013 images of the empty, unimposing stretch of sand with more recent shots showing the deep green of millions of precisely-positioned solar panels highlight just how quickly the country with over two-thirds of the world’s solar panel manufacturers can design, build, and deploy large-scale projects such as Longyangxia and Tengger.

Wind power, while providing less overall electricity than solar, has also made its mark on China’s western half. The Jiuquan Wind Power Base in Gansu province, located on the southern edge of the Gobi Desert, boasts more than 7,000 wind turbines and is planned to eventually have a total capacity of 20 gigawatts, making it the world’s largest wind farm. With six out of the top 10 wind turbine manufacturers located in China, stiff domestic competition will ensure that wind farms continue to proliferate.

Generation without a destination

While these three engineering feats are impressive for their size, scale, and capacity, they remain remote and isolated from the east where the vast majority of China’s people, technology, and industry lie. For renewable energy plants such as those found at Longyangxia and Jiuquan, this means that days of shining sun and blustery wind might produce electricity without a destination.

Cases such as this are known as curtailment, when power plants reduce their level of output or prevent electricity from being delivered to the grid. In 2016, Gansu province, where Jiuquan Wind Power Base is located, curtailed nearly 40 percent of all wind power produced there.

Are long-distance connections the solution?

Authorities in Beijing, seeing alarming trends across the country where electricity from renewable energy sources was being curtailed, began instituting plans and policies designed to arrest unacceptable curtailment rates. While these initiatives were designed to change the incentives around electricity generation and transmission, a much more visible effort has also taken place as the State Grid Corporation of China, the world’s largest utility company, began installing massive ultra-high voltage direct current (UHVDC) transmission lines connecting energy sources in the west with power-hungry residents in the east.

China has been developing its system of UHVDC lines since the 2010s. In early January 2019, State Grid energized a line connecting a remote power plant in Xinjiang province with Anhui province far to the east. Carrying electricity over 2,046 miles—roughly the distance between Salt Lake City and New York City—the project shattered existing transmission distance records. The Changji-to-Guquan project, named after the starting and ending points of the line, took roughly 3 years and $5.9 billion to build.

The sheer distance covered by these massive power lines is only half of the story. According to State Grid, the Changji-to-Guquan line can transmit up to 12 gigawatts of power, roughly the equivalent needed to provide electricity for 50 million Chinese households. Massive industrial components such as transformers and bushings allow the electricity to be transmitted over long distances without losing too much power along the way.

A part of the plan

This March, China released an outline of its 14th Five-Year Plan which includes an entire section on establishing a modern energy system. While the outline was short on specifics, it highlighted six types of construction projects that would fuel China’s climate change commitments, with “clean-energy bases” and “electricity transmission routes” making the cut.

Though the details are rough, the aim is clear: leverage abundant renewable energy sources available in China’s more remote regions to produce clean energy, then use efficient transmission projects such as the Changji-to-Guquan line to carry the electricity to where it’s needed most. This would give China a better chance at hitting its ambitious 2030 renewable energy targets while also igniting demand for local manufacturing and construction capacity that has gone underutilized due to the global pandemic and resulting economic contraction.

While this may seem like the obvious solution, keep in mind that much of China’s plans to reduce carbon emissions are carried out at the provincial level and that energy decisions must be cost-effective. It remains to be seen if local governments will embrace the expensive transmission routes endorsed by the central government. In the past, the relationship between UHVDCs and some provincial governments has been a rocky one, with some provinces reluctant to give up the local GDP and employment opportunities that go along with building their own power plants close to home.

Politics aside, projects such as the Changji-to-Guquan line have the potential to bring significant energy, environmental, and economic benefits, while also allowing planners to use China’s rich, yet remote renewable resources to power homes, businesses, and industry thousands of miles away. For the 94% living in the east, these developments should give residents at least one reason to breathe easy about China’s environmental future.

The Growing Intersection of Digital Health and Data Processing in China